Get fresh music recommendations delivered to your inbox every Friday.
We've updated our Terms of Use. You can review the changes here.

by The Heavy Eyes 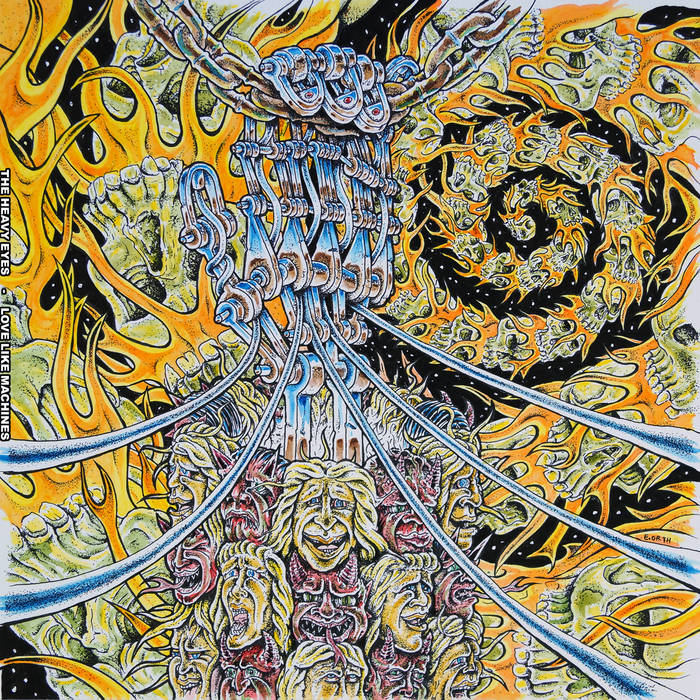 Cayce Hard to pick a favorite here; The Heavy Eyes just gets better and better every album and this is no exception. Couldn't be more impressed with em and every song on here is utterly great. Favorite track: A Cat Named Haku.

stoneygreenburn Mega Fuzz! The amp break up on the guitar tracks is fantastic! Superb song craft. The Heavy Eyes have long been one of my favorites. This album totally lived up to my high expectation!

doomcrew Such a solid desert rock album.Has alot of the same style as Brant Bjork's Che & the 1st Queens Of The Stone Age but The Heavy Eyes manage to keep their own identity through this entire album. Favorite track: Made For The Age.
more...

*Side Effects May Include: MILD TO MODERATE DEATH*

"Love Like Machines" serves another round of the Heavy Eyes' heady brew of tight riffs and Southern croon.

MEMPHIS, TN - "Love Like Machines" is the newest album from stoner rock veterans the Heavy Eyes. This is the firs release of new material since 2015's critically acclaimed "He Dreams of Lions". The music was recorded in sessions in New Mexico and their hometown of Memphis and produced by Matt Qualls, who has also worked with Dirty Streets, Cold Stares, Hash Redactor, Joy, and many more.

Despite the rabid reception of their first three albums, "Love Like Machines" almost never existed. By 2017, the band was on pause, with each member living in a different state. Spread across the Southwest and Midwest, there were new jobs, new cities, a marriage, and even a diagnosis. In short, there was every indication that the pause might become permanent. But by 2019, the Heavy Eyes had found a second guitarist and a second wind. The band was actively working on new material, exchanging beats, licks, and lyrics over long-distance. After two bouts of recording the record is here, five years in the making.

The Heavy Eyes have not let the time go to waste. "Love Like Machines" continues their signature sound: riffs that interlock like clockwork, rollicking drums and bass, and a Southern drawl that floats above it all like a ghost lost in a storm. But the new album delivers more than more of the same. After ten years together the band ventures into virgin territory. New sounds and structures await the listener. The songs sing of doomed armies, of lost loves, and of course, of that damn meddling Wolfman. In short, there is something here for everyone: the bellicose, the poignant, the absurd.

The band is currently booking an EU tour for early October 2020 with it’s first show announcement as, Keep it Low Festival in München, Germany. More dates to follow.

For more information, contact Eric Garcia at, eric@theheavyeyes.com, or www.TheHeavyEyes.com.

ALL SONGS WRITTEN BY THE HEAVY EYES

SPECIAL THANKS TO ANDY OTHLING, LUZ ALLISON, AND ALL OUR FRIENDS & FAMILY FOR THEIR CONTINUED SUPPORT

psychedelic blues rock from the delta that sounds similar to a skeleton driving a speed boat on a flaming Mississippi River headed back to 1969.

Bandcamp Daily  your guide to the world of Bandcamp